Originally from Lima, Peru, Nadia Calmet began her studies in folkloric dances in her hometown, specializing in Afro-Peruvian dances. She continued her studies in Yoruba Dances with the Conjunto Nacional Folklorico de Cuba in Havana, Cuba, and later studied Bomba y Plena dance with the iconic Ayala family in Loiza Aldea, Puerto Rico. Her training has allowed her to choreograph Afro-Diasporic pieces that traveled the world, especially when she toured with renowned singer Eva Ayllon. She is also a working actress and has premiered on several films and TV series in Latin America. She is the founder of Centro de Accion Cultural Afroperuano CEACA Peru, where she promotes Afro-Peruvian Culture.

Her latest works include ‘La Ruta del Tambor,’ ‘The Magic Of Folklore,’ and ‘Letters From Peru,’ all of which were produced in Los Angeles, CA, where she currently resides.

Indira Leneman, known as Laroye Aña, was born and raised in Havana, Cuba. She has studied genres including ballet, modern,  contemporary, hip-hop, Afro-Cuban, flamenco, Afro-Brazilian, and Haitian.  She has also performed in companies including Compañia de Teatro y Danza Tony  Menendez, Compañia de Danza Moderna Comtemporanea y Folklor Narciso Medina, as well as in several Cuban TV programs. From 2010 until she left Cuba in 2017, she was a dancer for Compañia de Ballet y Espectaculos Tropicana (also known as Cabaret Tropicana). Since moving to Los Angeles, she joined the Viver Brasil dance company and performed in the 2017 and 2018 “¡Viva Navidad!” shows at Disneyland. As an instructor, she taught Cuban salsa and Afro-Cuban dances in the annual dance and music festival ‘Baila en Cuba’ 2012 through 2016, and has been teaching private and weekly studio classes in these genres. In 2018, she taught several dance classes at California State University Fullerton.

Alfredo was born in Cuba. When he was eleven years old he immigrated with his family to Venezuela. Four years later he began studying the Venezuelan folk harp with his school friend Fernando Guerrero. A year later he became a pupil of Alberto Romero on the Paraguayan harp. Just two years after his first harp lesson, he began medical school at Universidad de Antioquia in Medellín, Colombia, began performing professionally and recorded his first album. Music supported his medical studies until graduation. Five years later he moved to the United States to continue studies of Music Therapy. Two years later he married Luz Marina Otero. For eight years from the time of his graduation from medical school, he worked in the medical field as well as a harpist and recording artist, until his wife became pregnant. In order to have time for his growing family, he then decided to dedicate his life only to them and to his first love: the harp.

With a multicultural repertoire that covers folk, classical and popular music from many countries, as well as his original compositions, Alfredo has performed for audiences of all ages and backgrounds. He has recorded many albums and is the winner of a GOLD RECORD in South America. He has lectured on a variety of subjects at universities, colleges and schools, is the author of several harp music books and articles and his compositions have been performed and recorded by classical and folk harpists in many countries. His“Venezolana for Five Pedal Harps” has become a favorite of harp ensembles around the world.

His acclaimed “South American Suite for Harp and Orchestra” premiered March 3, 1996. Dr Ortiz was invited to perform his Suite at the World Harp Congress in Prague, Czech Republic, in 1999, with the Prague Radio Symphony Orchestra, having as audience over one thousand classical harpists from around the world. He has also performed his Suite in Venezuela, Guatemala, Brazil, Turkey, New Zealand, Israel and with several orchestras in the United States, among them the New Mexico Symphony, Corona Symphony Orchestra, and the El Paso Symphony. With this last orchestra he recorded his Suite, available in CD.

Carolina Caycedo (1978, lives in Los Angeles) was born in the UK to Colombian parents.  She transcends institutional spaces to work in the social realm, where she participates in movements of territorial resistance, solidarity economies, and housing as a human right.  Carolina’s artistic practice has a collective dimension to it in which performances, drawings, photographs and videos are not just an end result, but rather part of the artist’s process of research and acting. Through work that investigates relationships of movement, assimilation and resistance, representation and control, she addresses contexts, groups, and communities that are affected by developmental projects, like the constructions of dams, the privatization of water, and their consequences on riverside communities.

Her projects have included the Naked Dave series of paintings and a self-published comic book, ‘Cihualyaomiquiz, The Jaguar‘. She was an Artist-in-Residence at Self Help Graphics & Art from 1993 through 1995 and participated in the Screen Print Atelier in 2003 and 2006. “She was a woman with great artistic talent”, says Barney Dino. In 2006 Molina founded Chicano Art Magazine and served as its first Editor-in-Chief. She has been quoted as saying on her art: “I will use my activism and creativity to end racism, sexism, and patriarchy at both a social and interpersonal level. I do not accept a hierarchy of genders because there is no justifiable basis for it and it does not serve me as a woman.”

Led by director Carlos Samaniego, Mariachi Arcoiris de Los Ángeles performs its repertoire to suit the LGBTQ+ community while maintaining the highest level of musicality. Mariachi Arcoiris de Los Angeles is proud to have the first transgender woman, Natalia Melendez, in the history of mariachi as one of its members. Natalia has been featured in a two-part special for Univision news, which depicts her life and struggles as a transgender woman in the mariachi world.

As a result of this two-part special, in its short existence, Mariachi Arcoiris de Los Ángeles has been invited to perform for three different morning news shows on Univision, which includes the ‘Lanzate’ program. During each one of these presentations, the mariachi was highlighted because of its special nature in representing the LGBTQ+ community. Due to the history that Mariachi Arcoiris de Los Ángeles is making, a recorded interview from NPR of this groundbreaking ensemble has been archived in the US Library of Congress.

Mariachi Arcoiris de Los Ángeles has also performed for Los Angeles and Long Beach Pride, Transgender Pride at the LGBT Center in Los Angeles, South Bay Pride, Oceanside Pride, The Abbey, Club Tempo, Hamburger Mary’s, #SchoolsNotPrisons tour for the Califronia Endowmnet, and many other LGBTQ+ establishments, as well as for many same-sex and “traditional” weddings.

Ramiro Ramirez is from Rancho de Joanica, municipality of Tierra Blanca, Guanajuato, México. He is a proud member of the Otomi ethnic group. Nearing the end of 1988, Ramírez was invited to join Tribu, a music ensemble that to this date promotes the ancestral music of Mexico throughout the world.

Ramirez has collaborated in twelve CD albums with Tribu in addition to collaborations with diverse artistic personalities and groups such as Joan Michel Jarre, Toshi Tzuchitori, the Tibetan monks of the Gaden Shartse Monastery, Aztec Mass of Joseph Julian Gonzalez, Olivia Gorra, Alejandro Lora (El Tri), Federico Alvarez of Toro, Alfonso Arau, and many more. After a year of initiating a solo career and in spite of his struggle with a visual disability, Ramiro Ramírez already has four musical CD productions of his own inspiration and authorship: ‘Otontecuhtli’ (elder of the Otomies), ‘Azteca,’ ‘Equilibrando Elementos’ (Balancing Elements), and his most recent CD album, ‘La casa de las almas’ (Home of the Spirits). Ramírez continues to preserve his roots and the natural sounds, but on this occasion he compliments his live presentations with electrical instruments.

Christopher Garcia is a performer/composer/improviser who continues to garner popular and critical acclaim in 28 countries on 5 continents for his original compositions and performances for indigenous breath and percussion instruments of Mesoamerica/Mexico and India alongside western classical instruments, creating a new resonance and vernacular since 2005.

He was one of seven composers from the Americas chosen and the only composer/performer chosen to have two of his compositions performed at the Latin American Chamber Music Festival held in San Francisco, CA, in 2013. Garcia continues to be invited as a composer/performer/improviser for chamber and symphonic orchestras throughout Europe and the Americas.

In the San Francisco Bay Area where he resides, he is one of the most respected exponents of folkloric music. Born in the city of Cardenas, Tabasco, México, his musical career begins in Tabasco and continues in the state of Oaxaca, Mexico City, and the United States. Surrounded by master folklorists, he roots his career in traditional music and discovers that this is his greatest passion. This transforms him into a collector and performer of native and traditional instruments, and, always thirsting to discover and learn about other cultures, he becomes an investigator of customs and traditions in dance and music. His devotion, creativity, and professionalism in the genre of traditional music have earned him the recognition of great musicians from Venezuela, Bolivia, Peru, Cuba, Puerto Rico, Brazil, and Argentina.

Born in Lima, Peru and living in the US since the mid-’90s, Gino Gamboa is a master percussionist, teacher, and instrument maker, and a prime exponent of Afro-Peruvian music. He has toured and recorded with Eva Ayllon, Peru Negro, Tolu, and Los Hijos del Sol.

His special focus is on teaching and fabricating the Peruvian cajón. Founder of the groups Armonia Criolla and Contrapunto and an integral member of Sajama, Gino was also a member of a Peruvian delegation that participated in the opening ceremonies of the Seoul 1988 Olympic Games. Since 2003 Gino has coordinated the annual ‘Concurso Internacional del Cajón.’ He continues to travel to different parts of the world offering clinics on cajón as well as presenting Peruvian music.

Author of the ‘Afro-Brazilian Percussion Guide‘ book series, Kirk Brundage is a classically trained percussionist who went on to play in Brazilian carnaval. 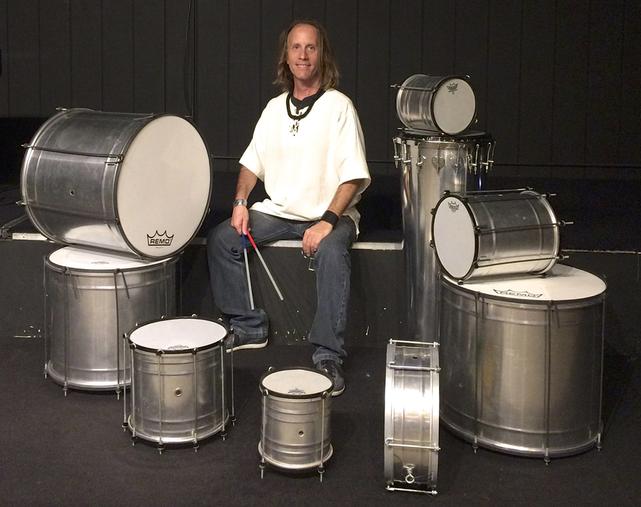 Originally from upstate New York, Kirk earned a Fulbright to Denmark and an MFA from CalArts before winning the International Solo Music Competition in Munich. For many years he was an ‘extra’ with the Buffalo Philharmonic Orchestra and a member of the Maelström Percussion Ensemble. Kirk also gave numerous solo performances around the US and Europe. Shifting artistic directions however, Kirk went on to play in Brazilian carnaval with samba reggae creators Olodum at the Latin Grammys with​ Brazilian pop star Daniela Mercury, a show with The Police drummer Stewart Copeland, and a recording with Grammy artist Beck.

LA-based, Kirk is a REMO Artist and has taught at UCLA. He is published by Alfred and has self-released two percussion CDs. Kirk’s work has been reviewed in ‘Modern Drummer’ and ‘Percussive Notes’ magazines- plus featured on the Brazilian television show ‘Planeta Brasil.​’

Kristin Olson is an accomplished percussionist new to the Los Angeles area. She studied percussion at Lawrence University in Appleton, Wisonsin and Indiana University in Bloomington, Indiana, finishing with an intensive focus on Latin percussion. While in school she worked closely with Michael Spiro, Dane Richeson, Nani Agbele, Jorge Alabe, and Wayne Wallace, and recorded on the Grammy nominated album Canto América by Wayne Wallace and Michael Spiro. Since attaining her masters she has performed, recorded, and taught extensively in Indiana, toured with Bloomington bands Diane Coffey and Busman’s Holiday, edited and published a book of transcriptions (El Lenguaje del Tambor), and returned to both of her alma maters to teach percussion as a Lecturer in Music. In Los Angeles she has performed with Kati Hernandez and Lazaro Galarraga, indie pop band Club Oro, and various other musicians and ensembles.